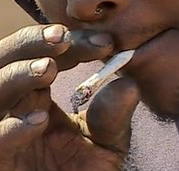 <![CDATA[<img class="alignright size-full wp-image-1687" src="http://www.rootshosting.co.za/docforlife/wp-content/uploads/2014/06/dagga.png" alt="dagga" width="179" height="171" />Regardless of pro-pot activists’ claims in the USA that legalization of dagga (cannabis) will reduce the underground sale of the drug, it is actually increasing. In the state of Colorado, the black market cannabis, which many expected to disappear after the substance was legalized about a year ago, is now thriving. According to the latest information from the U.S. Forest Service, cannabis is now grown on public land owned by the federal government in the state. Worse, it is controlled by Drug Trafficking Organizations (DTO’s). According to the latest information cannabis production is booming. Mr. Tom Gorman who heads a multi-state task force called the Rocky Mountain High Intensity Drug Trafficking Area, said one of the arguments for legalizing cannabis in Colorado and Washington State was actually to reduce the black market. But the facts are alarming. By legalizing cannabis in Colorado, they have become the black market for about 40 other states that they can document. According to Mr Gorman instead of eliminating it, Colorado has now become it. They are also the black market for those people under twenty-one. Yet, the “War on Drugs have failed” rhetoric echoes throughout the globe as celebrities and politicians jump on the band wagon. These activists, if you want to believe it, even claim legalization of drugs will actually reduce crime, drug deaths, the number of drug addicts and cut government costs, to name a few. Drug legalization/decriminalization is one of the ultimate goals of the controversial ‘harm reduction movement’, despite of its failures world wide. In the 1970’s, the Netherlands allowed individuals to buy 5g of cannabis at a time. Cannabis use among 18 to 20 year olds consequently increased from 15{01b0879e117dd7326006b2e84bcaac7e8fa1509c5c67baf2c9eb498fe06caff4} to 44{01b0879e117dd7326006b2e84bcaac7e8fa1509c5c67baf2c9eb498fe06caff4}. In 2004 the Netherlands government therefore implemented an action plan to discourage cannabis use and in 2008 Amsterdam started to close 43 so-called ‘Coffee shops’. According to a 2009 European Survey on Alcohol and Other Drugs (ESPAD), cannabis use among Dutch youth was more than double the European average. The proportion of school children that think regular cannabis usage involves big risks is the lowest in the Netherlands of all countries surveyed. The Netherlands thus moved to close ‘Coffee shops’ within a certain radius from schools and in May 2011 the Netherlands moved to fully ban all tourists from visiting “coffee shops” A Letter from Dutch Minister of Health and Justice stated: “This law will put an end to the nuisance of criminality associated with ‘Coffee shops’ and drug trafficking” Back in the US the stats don’t look much different. A recent report showed that five months into legal pot sales in Colorado, crime went up in Denver. The total number of reported offenses had increased by more than 10 percent, from 17,450 in 2013 up to 19,234 in 2014. In Aurora, violent crime is up 10 percent so far this year after pot legalization, with sex assaults up 30 percent and aggravated assaults up 24 percent.  In Englewood, robberies have increased 11 percent since 2013, and burglaries are up more than 68 percent. Another major impact that the legalization of cannabis had in Colorado was an increase in fatal motor vehicle accidents. In an August 2013 report, traffic fatalities in Colorado are shown to have decreased 16 percent, from 2006 to 2011, which is consistent with national trends.  But during the same six years in Colorado, traffic fatalities involving drivers testing positive for just cannabis increased 114 percent. In 2006, drivers testing positive for cannabis were involved in 28 percent of fatal vehicle crashes involving drugs.  By 2011 that number had increased to 56 percent. Numerous other problems related to drug legalization are also sited by world renowned researchers. Whether Colorado’s legalization experiment will eventually somewhat decrease black market pot, remains to be seen. But studies indicate that, for example, while legalized gambling in the USA decreased illegal gambling – legalization increased the amount of gamblers.]]>