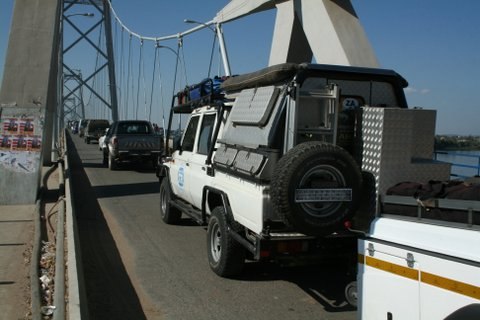 Day 2: The DFL medical support team departed from Pretoria at about 7:00 pm on Thursday evening. They arrived at the Zimbabwe border at about 2:00 am in the morning. Although, according to the border officials, two of the vehicle’s documents were not in order, they were finally allowed to proceed to Harare. They were stopped at various road blocks and because the police found fault with the vehicles, some small fines had to be paid. Mario Rocha – volunteer After an interesting drive through Harare the team arrived at the Highlands Presbyterian Church by 6:00 pm on 22 June. They basically drove for 24 hours and some of the drivers did not sleep at all. After a light meal in the evening, everybody retired early to get some rest. The next day they left for the Malawi border. The goal was to arrive at Salima, Malawi, that the same day. Day 3 “Driving through Malawi was an experience, especially at night. We had a few narrow escapes and it was obvious that the Lord kept us. At one stage we were behind a big truck and there was a stationary truck on the other side of the road. Suddenly another huge truck came from the opposite direction and probably did not realise that the other truck was not moving. The second truck came with a terrible speed and moved over to our lane to avoid a collision with the stationary truck. In the process it missed us by centimetres. In fact we could not understand how the truck could have missed us. There were these three huge trucks and us right in the middle of them on this narrow road. Oom Volkmar had to swerve quite a bit to avoid colliding with the oncoming truck. It was grace that we did not leave the road or even roll the truck.” The team arrived about 23h00 at Salima where they are staying at a neighbouring mission in tents. The people there really put in a lot of effort to prepare for the medical team’s arrival and the outreach. The team were all very tired after two days of continuous driving. After pitching their tents etc, they went to sleep after midnight. Day 4 On Sunday Pieter Bos left for the airport to fetch Dr Jacques Potgieter, Nick Ashton (MESF) and his colleagues Paul and Daisy. Unfortunately some of their luggage containing medicines did not arrive with them. The team tried to arrange a meeting with the officials today but it was not possible. They were going to meet them on Monday morning at 8am to plan the work. Eye surgery has however been delayed and would have only started on Monday night]]>