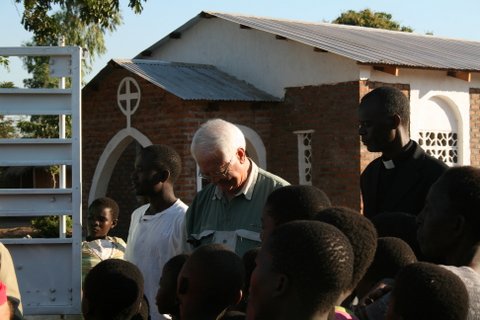 Youth of St Andrew Anglican Church[/caption] By late Saturday, 30 June we arrived at St Andrews Hospital, Malawi Midlands. During 28 and 29 we had many cataract operations and outreaches during the afternoon, and closed the day showing Christian Films. One of the patients we helped was the founder of Neighbour Mission. His photo is attached. On Friday afternoon we visited the area where we showed the film about a young African Muslim that converts to Christianity through various dreams (from the series More than Dreams). Uncle George had an impromptu service close to the Church which we were visiting. The Lord was very gracious and many came for counseling after the film. In Salima there are many Muslims. The film also touched many and a few gave their lives to the Lord Jesus. The Lord is very gracious. Early on Saturday, we realized we were robbed during the night. The thieves stole a few items such as a laptop from the Neighbor Mission, one mobile phone, etc. The worst for us was Dr Jac Potgieter. They took a bag with all his documents, money, Passport etc. He had to fly on Sunday so we contacted our Head Office and Johan obtained the number of the RSA consulate in Lilongwe. The lady told Johan that they could only help on Monday. Jac contacted the lady from Malawi and after prayer and a Police visit to our camp site she promised us that he would be issued with traveling documents. The thieves also took sister Kitty Ghampsi’s hand bag but dropped her passport not far from the camp. What can we say? A few trials but many blessings! Can we experience the Lord’s special grace without trials? We appreciate our prayer partners so much. Please let uncle Waldemar and others know about the Lord’s faithfulness. This morning we were invited to take the service at the local St Andrew Anglican Church which was very well attended. The team was also introduced to the congregation. Our dentist, Dr Ferreira and his wife Gisela took Jac to the airport (the consulate even organized a place for Jac to sleep). Now, on Sunday afternoon they picked up the rest of the team that flew from London and RSA. Herman started operating this afternoon. Please keep praying that the Lord in his grace will conquer the darkness with His precious Light. Mario Rocha]]>