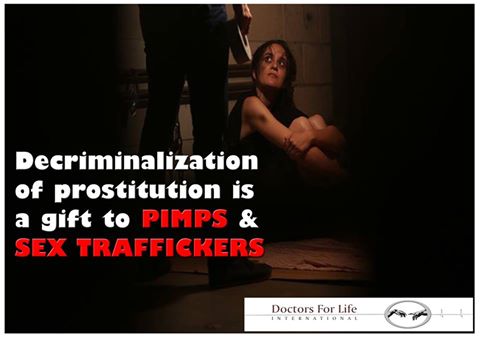 <![CDATA[ <h2>Doctors For Life Media Release Embargo: Immediate release Enquiries: Vaughan Luck Date: 2016-07-19 Cell: 078 748 9884 Email: [email protected] Doctors For Life International would like to applaud the Deputy Minister of Justice on his address to the conference on Tuesday 18 July. In the Deputy Minister’s address, he stated that decriminalization of prostitution is not likely to happen in SA. He listed among other reasons; increase in sex trafficking victims, increase in the number of women drawn into prostitution & increase in foreign women coming to SA for sex work. It is well documented that in countries where prostitution has been decriminalized e.g. Germany and Netherlands. Sex trafficking has gone up, prostitution involving underage girls has increased and the rate of HIV infection has increased despite condoms being made available. The violence, rape and abuse suffered by prostitutes didn’t go away, it just became an occupational hazard. Pimps became managers and human traffickers became recruitment agencies bringing girls to be used as sex slaves. (1) DFL believes the Dept. Minister of Justice has sent a clear message and indication on where the government stands regarding prostitution and believes this is a step in the right direction to abolishing prostitution completely. 1. Human Rights Magazine Vol.37 2010 http://www.americanbar.org/publications/human_rights_magazine_home/human_rights_vol37_2010/spring2010/sex_trafficking_and_hiv_aids_a_deadly_junction_for_women_and_girls.html 9 Country Study – Melissa Farley www.prostitutionresearch.com/pdf/Prostitutionin9Countries.pdf